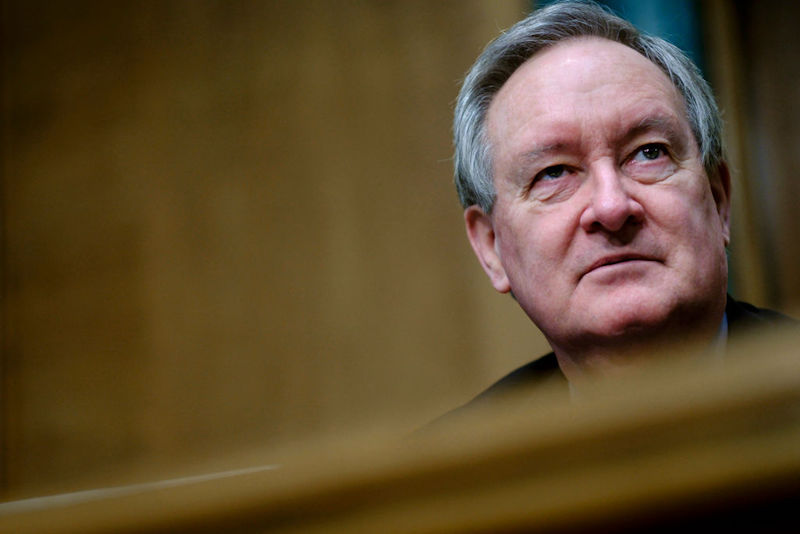 Dick Bove, a high-profile banking analyst, was feeling contrite. For years, Bove, a regular on CNBC, has been arguing for the rollback of regulations imposed after the 2008 financial collapse.

“But lately I’ve been trying to figure how regulation has hurt the banking industry,” Bove confessed in an interview last spring. “And I’m having a lot of trouble coming up with an answer.”

This week, the Senate considers the Economic Growth, Regulatory Relief, and Consumer Protection Act, a bill that represents the greatest threat to the Dodd-Frank financial reform law since its passage in 2010. The bill would relieve all but the country’s largest dozen banks of increased scrutiny and ease mortgage rules imposed after the financial crisis. It would undermine fair lending rules designed to counteract race discrimination and weaken the Volcker rule, which limits a bank’s ability to make speculative trades with federally insured deposits. The arguments that Bove has been making publicly for years are the same specious ones being offered by the bill’s co-sponsors, and the trade groups calling for a rollback of banking regulations: Banks are suffering and so, by extension, are consumers, businesses, and the economy at large.

“When you take a close look,” Bove says now, “it’s really hard to argue that regulation harmed the banking industry.” Bank earnings have gone up every year since 2010, according to data from the Federal Deposit Insurance Corporation, and soared more recently. “In 2014, and again in 2015 and 2016, bank earnings hit all-time records,” Bove said. “Loan volume, which was obviously lousy at the beginning of this period, picked up substantially in 2014, 2015, and 2016.”

Not that many inside the Beltway seem to care. To the extent pundits are talking about the bill, it’s to hail a rare show of bipartisanship. A dozen moderate Democrats are listed among the co-sponsors of what insiders refer to simply as the Crapo bill, after its main sponsor, Mike Crapo, R-Idaho, chair of the Senate Banking Committee.

“I don’t think that if you’re really thinking about the vast majority of Americans, you decide that your very first bipartisan bill is one that deregulates some of the biggest banks in the country,” said Dennis Kelleher, president of Better Markets, which pushes for tighter regulation of financial institutions. “But let’s take a step back and ask why there’s a bill at all. They’re saying, ‘We need ‘regulatory relief.’ How could you need regulatory relief if lending profits and every other metric you can look are at or approaching historic highs?” 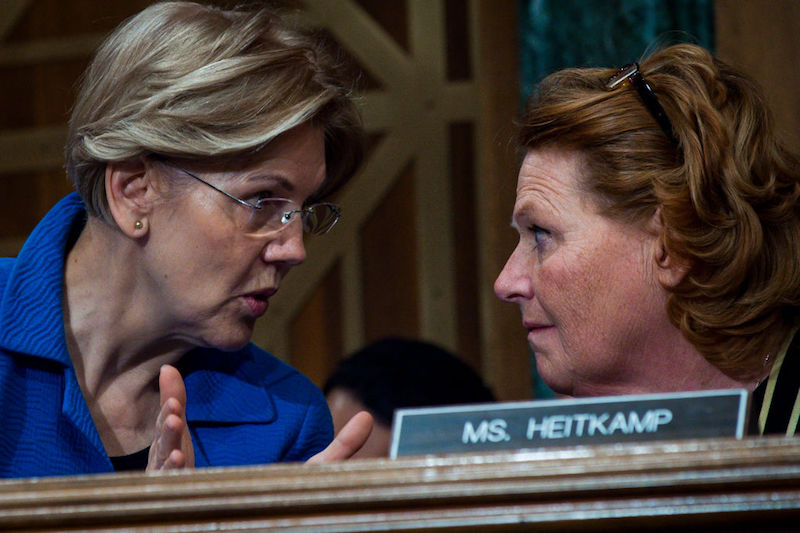 The hardships purportedly faced by community banks come up a lot in the push for deregulation. “Since Dodd-Frank was signed into law in 2010, community banks in Tennessee and across our country have faced an overwhelming and disproportionate regulatory burden,” Sen. Bob Corker, R-Tenn., said when endorsing the Crapo bill in November. The “long overdue” unwinding of Dodd-Frank, Corker declared, “will help our community banks better serve hardworking Americans.” Mark Warner, D-Va., hailed the bill for making “targeted, commonsense fixes that will provide tangible relief to the community banks that are lifelines for smaller and rural communities.” Heidi Heitkamp, D-N.D. — identified by the Washington Post as one of the top Senate recipients of donations from commercial banks so far in the 2018 campaign cycle — said it offered “needed relief to community banks and credit unions,” and was vital in “helping farmers get loans to support their farms, and allowing families to buy homes in rural communities across our state.”

Few in Congress oppose helping community banks. The country’s smaller banks played almost no role in the subprime disaster, and most agree that they shouldn’t be subjected to extra scrutiny because of the misdeeds of their larger brethren. “In the past, there’ve been 90 votes in the Senate for regulatory relief targeted at community banks with $10 billion or less in assets,” said Kelleher, who spent eight years as a Senate staffer. But that’s not the narrow target of the Crapo bill, he points out, which grants regulatory relief to banks with up to $250 billion in assets. Only 12 banks fall above the Crapo’s massive $250 billion threshold — under the bill, no other bank would be considered “systemically important” and thus, would be freed of additional oversight by federal regulators, such as fewer stress tests and lower capital requirements. Currently, only banks with under $50 billion in assets (the vast majority of the country’s 5,000-plus banks) are granted an exception from increased government scrutiny.

A $250 billion asset threshold gives a pass to Deutsche Bank, for example, which is at the center of Robert Mueller’s investigation of Russian interference in the 2016 presidential election, and also to Barclays, Credit Suisse, and Santander — all large global banks with a significant footprint in the United States. Elizabeth Warren, D-Mass., has pointed out that Countrywide Financial played an outsized role in the 2008 subprime meltdown while sitting on less than $250 billion in assets. Likewise below the cutoff is the publicly traded Ally Financial which, as GMAC Financial, was also a central culprit in triggering the 2008 crash.

Jon Tester, D-Mont., another of the Crapo bill’s dozen Democratic co-sponsors, invoked Main Street when talking up the bill during a November Senate Banking Committee meeting. “These folks are not wearing slick suits in downtown New York or Boston,” Tester said of the bill’s beneficiaries. Perhaps not, but as the bill would lift regulations for a long list of what are called “super regionals,” they’re likely wearing slick suits in Atlanta, where SunTrust has its headquarters, or Chicago, where Northern Trust is based.

The average community bank employs 133 workers, according to the website of its trade group, the Independent Community Bankers of America. SunTrust, a publicly traded company, has more than 24,000 employees and operates thousands of branches across 11 states in the southeast. In 2014, the bank paid just under $1 billion in fines for its misdeeds related to the subprime crisis. (“SunTrust’s conduct is a prime example of the widespread underwriting failures that helped bring about the financial crisis,” then-Attorney General Eric Holder said at the time.) More recently, the bank was fined in 2017 for improperly steering customers to high-fee mutual funds.

“Community banks are the most exhausted Trojan horse ever to be used,” Kelleher said. “The Wall Street PR machine has elevated community banks to the levels of motherhood, apple pie, and the American flag.” So, too, has Steven Mnuchin, a lifelong denizen of Wall Street, who claimed during his confirmation hearings that “regulation is killing community banks” — a sentiment as commonly expressed as it is false. A 2017 FDIC report shows that deposits in community banks have grown in each of the past six years. Another report showed that 96 percent of the country’s 5,294 community banks were profitable, as of the third quarter of 2017.

Earlier in his presidency, Donald Trump made clear his views on any bill that rolls back financial regulation. “Frankly, I have so many people, friends of mine, that have nice businesses and they can’t borrow money,” he said a few weeks into his new presidency. “They just can’t get any money because the banks just won’t let them borrow because of the rules and regulations in Dodd-Frank.” Five days later, Rep. Jeb Hensarling, chair of the House Financial Services Committee, added his voice to those claiming that Dodd-Frank and the Consumer Financial Protection Bureau it created were strangling banks – and, by extension, the economy – even as lenders were posting record profits year after year.

“The number of banks offering free checking has drastically declined,” Hensarling wrote in a Wall Street Journal op-ed less than a month into the Trump presidency, “while many bank fees have increased. Mortgage originations and auto loans have become more expensive for many Americans.” Troubling developments — except none of them true, according to Adam Levitin, a professor at Georgetown Law. Writing on an academic blog called Credit Slips, Levitin responded to Hensarling’s op-ed with a point-by-point refutation of these and other “verifiably false” claims.

“Free checking has become more common, bank fees have plateaued after decades of steep increases, and both mortgage rates and auto loan rates have fallen,” Levitin wrote by way of introduction to a long post littered with equations and graphs. Levitin quotes the American Bankers Association’s own numbers to show that free checking has increased from 53 percent to 61 percent of accounts since Dodd-Frank passed and cites government data showing that mortgages are cheaper post-Dodd-Frank than they have been in decades.” The numbers don’t lie,” he concluded. “Jeb Hensarling is pushing a huge regulatory reform based on, um, ‘alternative facts.’”

The American Bankers Association claims the financial reforms “are keeping creditworthy customers from getting loans they need.” The numbers, however, tell a different story. Business loans are at an all-time high, according to data collected by the St. Louis Federal Reserve, and, for better or worse, Americans are borrowing to buy cars like never before. When Americans collectively owed $12.7 trillion in mortgages, student loans, car loans, and credit cards in the credit bubble of the fall of 2008, just before the crash, we owed the same $12.7 trillion in 2017. 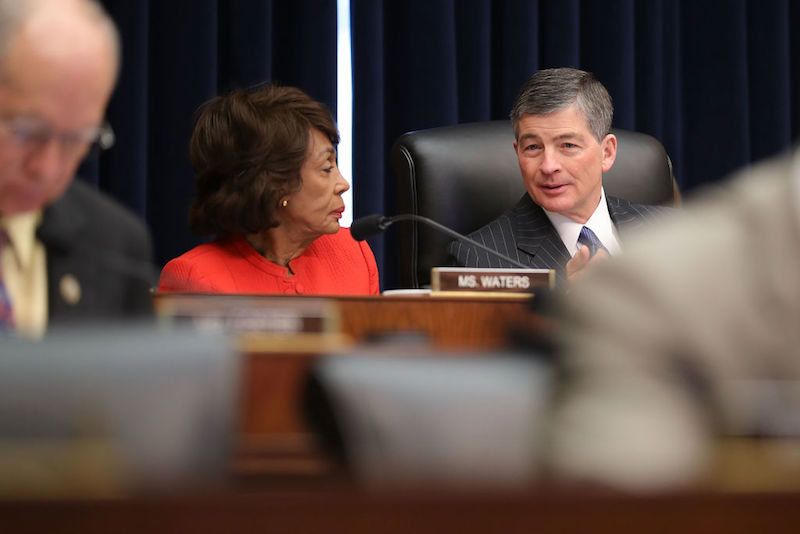 Hensarling has also blamed Dodd-Frank for putting banks out of business, as have a banking trade groups. “We’ve lost 159 banks in TX since 2010 — these banks simply couldn’t keep up with the regulatory tsunami coming from DC,” the Texas Bankers Association — based in Hensarling’s home state — tweeted in support of the Crapo bill, along with the hashtag #regreform.

There indeed are fewer banks today than in 2010, but that trend predates Dodd-Frank by several decades. Data from the FDIC shows the shrinkage starting around 1983. “Yes, the number of banks has declined,” Levitin wrote last year. “But it’s done so at the exact same steady rate of 316 banks per year that it has done for the last twenty-six years.”

“You listen to what’s being said to justify the Crapo bill and you have to shake your head,” Kelleher said. “They repeatedly make the same claims even when objectively they have been proven false.” Critics like Kelleher are even dubious of the few consumer protections included in the Crapo bill, such as a post-Equifax rule that lets people freeze their credit. These are “tokens,” said Americans for Financial Reform, a Washington, D.C.-based advocacy group pushing for greater financial reform, tacked on to provide cover to a bill that is mainly about financial sector “giveaways.”

The rare claim made by proponents of the Crapo bill that is backed by the data is a decline in small business loans – down 41 percent since 2008, according to the U.S. Chamber of Commerce. Yet, again, that trend seems entirely unrelated to Dodd-Frank. Venture capital investment in startups spiked during that same period, doubling from less than $50 billion in the United States in 2010 to more than $125 billion over the past few years. A 2016 survey of small business owners by the New York Fed found that most were optimistic about what they saw as a relatively healthy economy featuring an official unemployment rate at relatively low 4.1 percent. Those struggling to raise money, the Fed found, tended to be small companies with weak credit scores and insufficient credit histories.

“Is the world going to end if the Crapo bill passes? No,” Kelleher says. “Is it going to very significantly reduce the financial protection rules? Yes. Is it going to increase the likelihood of future crashes and bailouts? Yes. There’s no way around that.”

This article — which first appeared at The Intercept — was reported in partnership with The Investigative Fund at The Nation Institute, now known as Type Investigations and is published here with permission.

Long-time journalist Gary Rivlin is a reporter with Type Investigations.

Susan Antilla is an award-winning investigative journalist, columnist, and author writing about business and finance.